Posted at 19:16h in Training by PlayDifferentAurora

To commemorate the 50th anniversary of Title IX — a landmark piece of federal legislation providing equal rights and opportunities for women in education, including athletes — this series celebrates some of the best women in sports to pass through Gustavus Adolphus College.

It was a beautiful October afternoon — Senior Day for the Gustavus women’s soccer team. Forward Tam Meuwissen ’13 stood with her four senior teammates at midfield, along with their parents. Suddenly, the realization hit her.

“It hit me hard,” Meuwissen recalls. “It was such a weird feeling, knowing that this important part of my life wasn’t going to be there anymore.”

Meuwissen played more games for the Gusties that year. Along with soccer, she was also on the varsity hockey and club lacrosse teams. But she knew for most Gustavus athletes, senior year brings an end to years in organized sports. 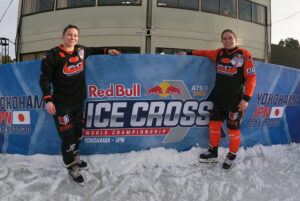 Mauwissen (right) and her twin sister Sam have traveled the world as ice cross racers.

Meuwissen had started at a young age, along with her twin sister, Sam, who went on to play soccer and hockey at Concordia University in Wisconsin. Their parents had been athletes, and sports were an important part of their lives while growing up in Chanhassen.

Today, years after ending her career as a Gustie athlete, Meuwissen is back in organized sports. She travels the world to perform in front of big crowds and TV cameras. Yet she is competing in sports she never even heard of in college: ice cross and bandy.

The basic equipment for both bandy and ice cross are hockey skates. But that’s where the resemblance ends.

Ice cross is a new sport. The first world championships took place in 2010. Four skaters hurtle down a narrow course, navigating jumps and hairpin turns, hitting speeds up to 50 miles per hour. The first time Meuwissen stood at the starting drop, she was terrified. “Anyone who tells you they’re not scared is lying,” she says.

Both Meuwissen and her sister have traveled the world on the Red Bull Crashed Ice tour, the international circuit of ice cross races. They have competed in France, Finland, and Japan, as well as on Cathedral Hill in St. Paul and Fenway Park in Boston. Tam is currently ranked eighth on the tour.

Meuwissen’s other sport also brings her around the world. Bandy resembles hockey, but it is much older, having been invented in England in the early 1800s. Bandy is also played on a larger rink, about the size of a soccer field, with 11 skaters on a side. Players use short sticks to hit a ball, rather than a puck.

Today, she is a member of the US national women’s team, along with seven other Gustie hockey veterans. The team’s coach, Chris Middlebrook ‘79, also played hockey at Gustavus.

Meuwissen enjoys the mix of hockey and soccer in bandy. “It’s a combination of all the things I know,” she says, “but with new elements I hadn’t seen before. You can move faster than in soccer, but the action develops more slowly than in hockey.”

Neither bandy nor ice cross is a professional sport. Meuwissen has to schedule training and travel around her job with United Health Group. Still, she feels lucky for the opportunity to compete. “Every time I’m at a race, or when I’ve been to China or Norway for bandy, I look around and ask myself, ‘How did I get here? This is astonishing.’”

“How many people can say they do this?” Meuwissen asks. “I love competing. But instead of playing in some local hockey league, I get to travel around the world to play bandy and skate in ice cross.”