Posted at 22:53h in Tournaments by PlayDifferentAurora

PHOENIX – The Grand Canyon University women’s soccer team has had a monumental run throughout the 2021 season. The Antelopes are 12-2-2 and guaranteed a winning record, something they haven’t had since the 2015 season.

But there are still plenty of goals to reach.

GCU is trucking towards the chance to hold the WAC championship trophy for the first time in program history. They are currently atop the WAC West Division with a 5-0-2 record, including a landslide 6-0 drubbing of New Mexico State.

“Every team we talk to, they’re saying that GCU is the team to beat,” said Haley Bostard, a senior midfielder. “That’s a big responsibility on us because everyone is bringing their best game to play us.”

Although GCU is nearing the end of its regular season, the Lopes feel as though they are just at the beginning. The ultimate goal is the WAC championship, and then reaching the NCAA national tournament, which would also be a first for the program. The players aren’t letting the success they’ve had so far water down their determination to shine in the postseason.

“You can see the hunger and desire for more,” coach Chris Cissell said.

The Lopes’ turnabout can be traced to last spring, when they started 1-7 while playing through the pandemic, but made a late season push to finish 8-9-1. Cissell believes the end of last season, his first with the program, transitioned into this season, keeping the winning mentality alive.

“The girls have all bought into our style and our tactics, and the way that we want to play and it’s brought a ton of success,” Cissell said. 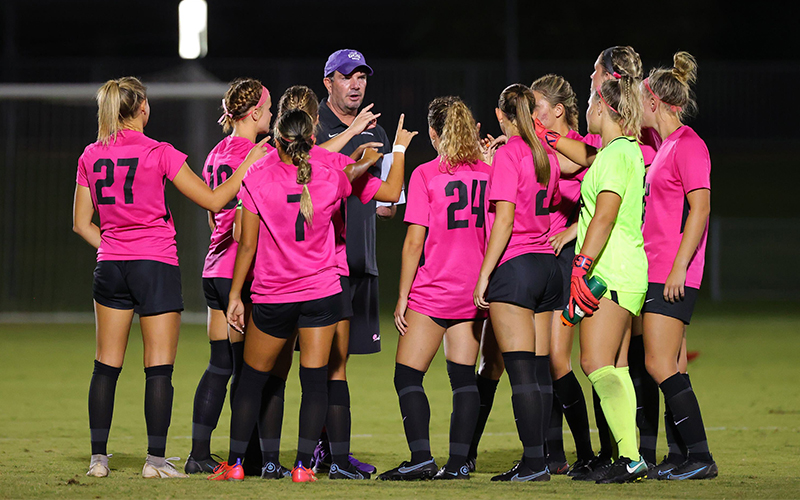 GCU women’s soccer coach Chris Cissell has the Lopes playing at a level that has earned high praise from the collegiate soccer community. (Photo courtesy of GCU Athletics)

The team chemistry, Cissell said, has been a big factor in the team’s success. The Lopes have 44 goals this season, leading the conference by a 15-goal margin. The offense has been dominant, but Cissell said the Lopes’ defense is just as strong. Their dynamic style comes not only from the finishes by the strikers but also from the grit of the keeper, the strength of the defense and the movement from the midfield.

The Lopes’ determination has been apparent in tight games. They opened the season by holding the University of Arizona scoreless in an exhibition tie. The Lopes have also experienced two overtime golden goal victories.

The Lopes’ first overtime win was a double overtime battle against UNLV that ended after 104 minutes of play, forcing the Lopes to fight until the end. A similar win was earned against Seattle U, a game that remained scoreless until the golden goal in the 94th minute by senior midfielder Marleen Schimmer.

“We didn’t have our best game but I think it was good for the girls to realize even against a team as great as Seattle, even when we’re not playing our personal best we found a way to win and it was on hard work, and grit, and determination,” Cissell said. “It wasn’t as much our technical and tactical side as it was heart and passion.”

Cissell said that good teams find a way to win and that’s what the Lopes do. When the game is in crunch time the Lopes prove their determination and continue to hold their ground.

“We have to stay confident, don’t let the success get to our heads, stay on the ground, and keep that championship mentality,” Schimmer said.

Schimmer is the team’s leading scorer with 10 goals, including three in a 6-1 win against California Baptist. She also leads the team with nine assists, and was awarded College Soccer News Women’s National Player of the Week for her hat trick and golden goal performance in the first game with Seattle U.

The Lopes’ second matchup against Seattle U last Friday was another close win, with a late goal in the 85th minute pulling GCU ahead, 2-1. Two days later, still on the road and playing California Baptist a second time, the Lopes again went down to the wire. Schimmer’s penalty kick goal put the Lopes on the board and carried them all the way through two overtimes before the game ended in a 1-1 draw.

Schimmer counts on the trust from her teammates when making big plays. She said that everyone on the team knows their role, and would do anything for each other, making the Lopes’ team chemistry work well on the field. The players pride themselves on holding each other accountable.

“This team is really good about making sure we bring our best every day,” Bostard said.

GCU has three games remaining in the regular season, beginning Saturday at New Mexico State, before closing out with a pair of matches at home. Then it’s onto the WAC tournament in Abilene, Texas, Nov. 3-7, where the Lopes hope to lean on the fortitude they’ve shown all season.

“I have high expectations and high standards,” Cissell said. “I expect us to be competing for the championship for the regular season, and for the conference tournament.”