Posted at 00:38h in Training by PlayDifferentAurora

When head coach Nicky Adams arrived at Syracuse in spring 2019, Syracuse’s roster contained just two international players. She noticed that the team had no players from Ontario, Canada, even though the province is just 200 miles from Syracuse University’s campus.

Adams wanted to bring a new philosophy and international players to her team, but the recruiting process typically starts two years prior a player’s freshman year, meaning she wouldn’t have control over a recruiting class until the 2021 season.

She followed up on her promise with eight international players featured on Syracuse’s 2021 roster. Four international freshman players — including three from Ontario — have contributed to Syracuse’s best start to the season since 2016.

When she got to Syracuse, Adams wanted to focus on the area where previous coaches didn’t recruit. She saw an opportunity to recruit some of the best players in the country in Canada. Ontario is home to one of Canada’s four national training centers, which prepares players for the Canadian national team — the women’s soccer gold medal winners at the 2020 Tokyo Olympics.

“I was a little shocked there were not more Canadians on the roster when I got here, especially being so close to Ontario,” Adams said.

Freshmen Pauline Machtens from Germany, along with Koby Commandant, Kylen Grant and Sierra Giorgio from Ontario have made an immediate impact at Syracuse. Machtens and Commandant have started every game. Grant opened the season as a key substitute and has secured starting spots in SU’s past two matches, including its first conference game. In consecutive wins against Binghamton and New Hampshire earlier in the season, Machtens and Grant combined to score all three of Syracuse’s goals.

Casey Downey, the coach of Commandant’s club team, the Burlington Bayhawks, agreed with Adams’ sentiment about SU’s lack of Canadian players. Throughout his 30 years of coaching in Burlington, Ontario, Downey has helped secure nearly 150 NCAA scholarships for his players, including sending players to Rice University, where Adams was previously the head coach. But he could never seem to form a relationship with Syracuse, despite its status as the closest Power Five conference school to the area.

“The men’s program has always recruited in this area, but Syracuse prior to Nicky? I could never make inroads,” Downey said. “Syracuse would never ever play ball with me.”

According to Downey, the Syracuse men’s soccer team has historically recruited in Ontario. There are currently four players on the men’s team from Ontario. In recent years, SU has landed players like Bayhawks alum Ryan Raposo, who was selected fourth overall in the 2020 MLS SuperDraft after his career with the Orange.

Adams saw international recruiting not just as a space that Syracuse had failed to recruit during prior seasons, but where she could find more players to fit her style of play. Half of the international players on Syracuse’s roster have experience for their country’s national team, which gives them valuable experience, Adams said.

Even though Machtens is a freshman, she’s already played in over 50 games for her German club team Bayer Leverkusen. She also secured roster spots on Germany’s U-15, U-16 and U-18 national teams and has played in multiple international contests. 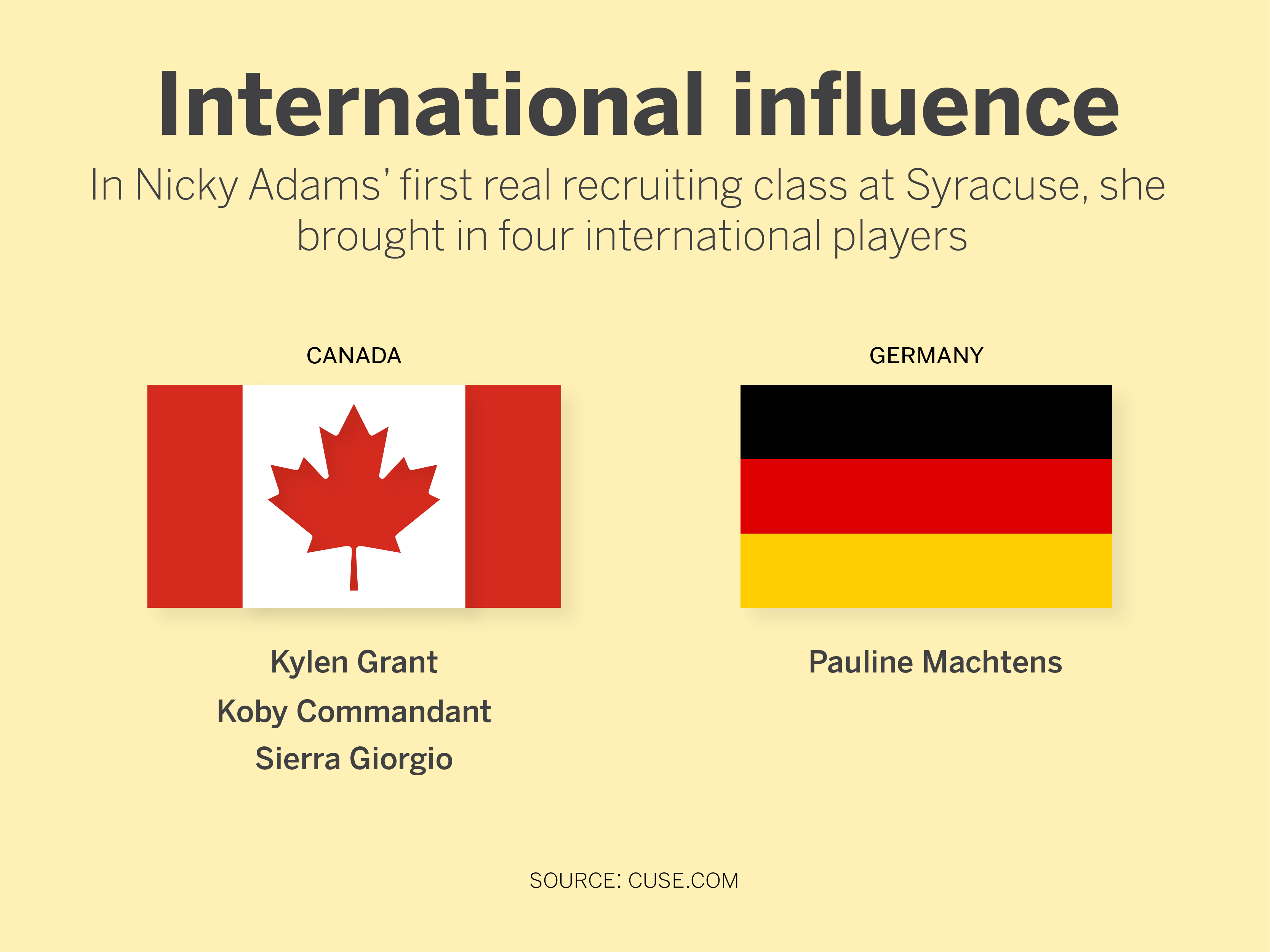 The goal for everyone at Grant’s club team in Ottawa was to play collegiately in the United States, she said. Downey agreed — his players’ goals were to play in the NCAA, not the national team or in professional leagues.

In order to secure international talent, Adams, assistant coach and recruiting coordinator Kelly Madsen and assistant coach Brandon DeNoyer are consistently on the road trying to form connections with international club coaches. Due to COVID-19 restrictions, the coaching staff often had to resort to Zoom calls but visited players in person when they could.

Through weeks of communication, Machtens, Commandant and Grant all said Adams sold them on building a new brand of Syracuse soccer. And this season, they’ve helped her create this different style, leading SU to its best start since 2016.

“We’re coming out of a new era with Nicky being a new head coach, and she just seemed so excited for this incoming class. And she was just very confident in this class,” Commandant said. “It made me want to be a part of it.”