Posted at 01:45h in Training by PlayDifferentAurora

“It just felt amazing,” Miller said after the win. “That is what we were looking for the whole year. It is why I came here because I knew everybody was just crazy talented. I knew we were going to have a good shot at it but of course you have to put the work in. You have to get it done and we did. It just felt like a dream come true. Everything that I wanted to happen, happened. There are not any other feelings that are quite as good as that one.”

Miller, a sophomore, and freshman teammate Chiaki Takase each had six shots in the game.

Peninsula outshot Clark 23-10, including a 14-4 advantage in shots on goal, as they won their fifth title in the past 10 years, nine of which saw the team in the finals.

Miller also had the assist on the match winning semifinal goal in the Pirates 2-1 win over Columbia Basin.

Most of Miller’s youth and high school career was played right in the middle as an attacking mid or forward. At Peninsula she has been used typically on the left or right wing.

“I’m not going to lie, that was pretty tough,” Miller said. “It did hurt me a little bit. I have never played out there. I do think I am decent enough to where if I have to step up somewhere and play a different position, as long as it is not center back maybe, I can do it. I think that it was a good experience for me to get to play in that new position because at the next level who knows, I may not play in the middle. It is just good to have an open mind set of where I might be playing.”

Miller is also second in career assists with 30 (Taylor Bentley 41) and individual season assists with 16 (Bentley 17).

Miller was also selected the Gatorade Alaska Girls Soccer Player of the Year as a senior.

“To still try and be at the top,” she said. “Try and play my best. That was something I definitely tried to live up to. I never want the standard to drop for myself.”

Miller, who is majoring in marketing, played her freshman season at Bellevue College. The team that season would lose to Peninsula in the quarterfinals. Miller scored 17 points in 17 games to earn All-NWAC honors and finished with four goals and nine assists.

“It was tough my freshman year making that adjustment,” Miller said. “Having, say, a six a.m. lift, then go to class and practice later in the day. It was tough sometimes but as time goes on and you get used to the schedule it gets easier. The biggest thing was the change of pace. Having a group of people, not always, but if you are lucky like we did this season at Peninsula, having a group of people that all have the same mind set. I would say the competitiveness is a lot higher in some ways.”

In 2020 COVID limited league play to friendlies and did not count as a year of eligibility. Miller tore her lateral meniscus just three games into the season. She would transfer that summer to Peninsula.

“My rehab wasn’t too bad,” Miller said. “I just had to take a month off. I didn’t have to do any physical therapy, I just had to rest it.”

Miller was unable to train but was able to work back into shape.

“Bellevue just wasn’t working out,” Miller said. “The coach had a different vision for the team and didn’t have the same mindset I wanted and Peninsula did. I decided that I wanted to come work hard for this program and give it everything I had. I thought it would be more beneficial to me and I felt I could help other people too and build better relations.”

Peninsula coach Kanyon Anderson said this year’s team was the deepest he has had in 10 years, of which each season has been into the semifinals and nine of those years into the finals.

“Honestly I knew they were going to be good,” Miller said. “In 2019 we played them and they beat us 4-0. I knew they were going to be good coming in but I was just hoping that I could bring some more of that championship spirit to the team because I felt like I was on the same page as far as everyone else. Just wanting to get better and get a ring for this last year that we had. We have a lot of super sophomores on this team. I think it just meant a lot to all of this to win this last year. I am still learning every day. I think coming here I learned a lot more just being around so many good players every day whether it is training, or games or just watching film sessions. Everybody has great knowledge of the game and it is just cool that I get to share it with so many other people.”

“I love having my high school coach there,” Miller said. “It is always fun. He was there for the quarter final too when the Peninsula team beat me 4-0. He came and he drove all the way out to Peninsula to watch that game as well. He’s always there to support me after my games. Still analyzing, still coaching, that is what he does best. It is really fortunate to have him there even a few years after I’ve graduated.”

Miller totaled 12 points on the season in 16 games for Peninsula, scoring four goals and getting four assists.

Of her knee injury, Miller said offseason work is important.

“It is really important,” Miller said. “I couldn’t work out in the summer like I do. It is tough to get back in the grove. Now I do anything to get touches on the ball in the offseason, anything to just play the game. I play a lot against my brother (Sherod Miller), he and his friends push me off the ball, make me stronger. If I could do anything different growing up I would probably do more work on my leg strength.”

Miller’s community college eligibility is done and she will hope to play at a four-year college next season.

“I am not sure where yet,” she said. “Hopefully somewhere warmer than Washington. No preference for schools. Maybe somewhere down south or on the west coast, somewhere warm.”

Miller was asked what advice she would give to young players in Juneau.

“Just don’t stop,” she said. “You might think that you are maybe at your best, or the best, but there is always room to improve and there is always new goals to chase and don’t ever be satisfied with what you do.” 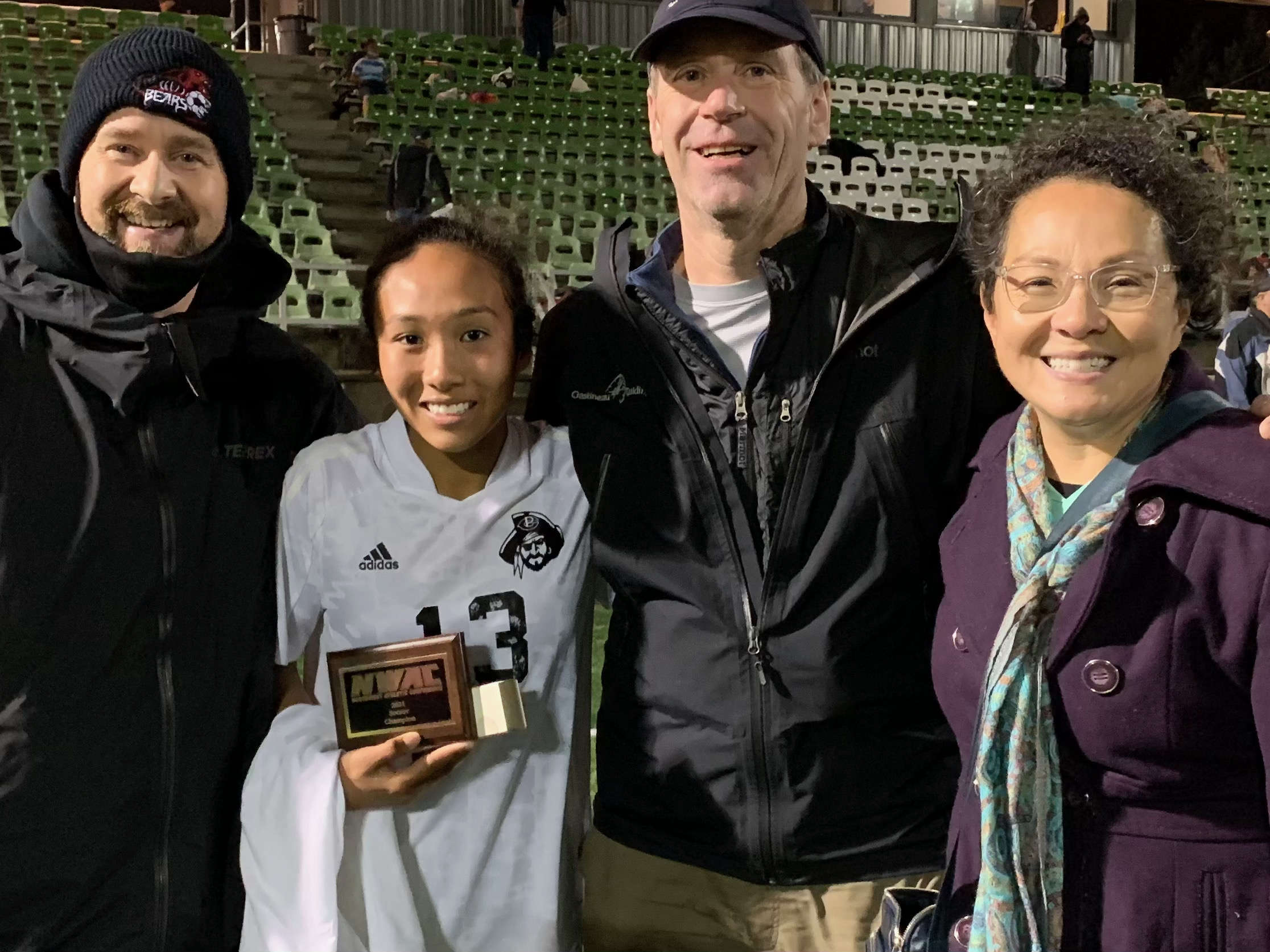