Posted at 02:42h in Training by PlayDifferentAurora

When Samantha Howson’s twin daughters went to The Governor’s Academy soccer games, they weren’t interested in seeing their older sister play. Instead, they wanted to see Jenna Tivnan head the ball. Tivnan would move from her defensive position at center back into the opponent’s box. Then, she would jump up and nail the ball with her head into the back of the nylon.

“We always pulled her up,” said Howson, the school’s women soccer assistant coach. “That was the goal: just find Jenna’s head.”

Heading is a technique Tivnan has spent over a decade mastering. SU head coach Nicky Adams considers the senior center back one of the best airborne players in collegiate soccer. This season Tivnan has helped Syracuse (4-3-1, Atlantic Coast 0-1-0) post four shutouts using the technique she’s honed since elementary school to either stop opponent scoring opportunities or create ones for herself and her teammates. While the Orange posted a 1-7 record and only scored five goals last season, two of them were scored by Tivnan. Both were headers.

“Everyone’s like, ‘How does your head not hurt after hitting it so much?’” Tivnan said. “I’m like, ‘Because I do it correctly.’”

Before Tivnan developed her ability to perform airborne on the pitch, she tagged along to her older sister Sam’s youth practices. Tivnan joined a preschool league, often trucking over players as she advanced down the field, her parents said.

Tivnan kept playing in a local recreational league, and in second grade, she was put on a Easton Youth Soccer travel team normally reserved for third graders. John Barata, the team’s director of coaching and player development, initially faced backlash for having a 7-year-old play among girls that were older. But still, he used Tivnan as a forward because of her speed and strength. Eventually Barata showed Tivnan the basics of heading, teaching her to use her forehead instead of the top of her cranium.

Barata and Tivnan started with heading beach balls and kick balls before moving to soccer balls. While other Easton players would shut their eyes and flinch when a ball came toward their head, Tivnan would keep her eyes open and connect with the ball. After honing her header, Barata would tell Tivnan she couldn’t use her right foot so she could focus on strengthening her left side, her mom Teri Tivnan said. 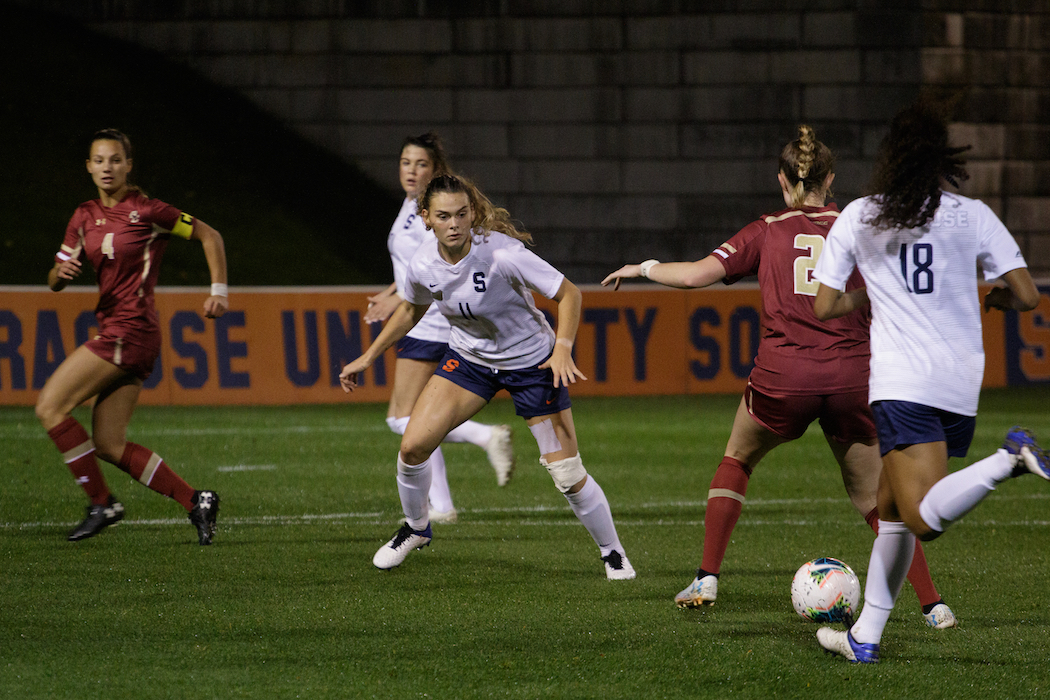 Tivnan and her family decided to place her in the New England Football Club when she was 9 years old. Tivnan began to hone her header’s timing and angling through repetition in training once a week with coach Nick Burke, a former player in the English Football League Championship. To practice more, Teri said Tivnan would pull her out of the house and into their driveway to work on headers, and she would go to a local high school field with her dad to kick corners.

Burke eventually approached Tivnan’s parents about moving her to a center back, citing her aggressiveness and high soccer IQ. The coach moved Tivnan from center forward to attacking midfielder and eventually to center back over the course of a few months. Even though she played defense, Burke allowed Tivnan to come up during set pieces for header attempts.

Tivnan continued playing at NEFC while attending The Governor’s Academy, and she led her school’s team to 11 wins out of 16 games during her freshman year, her former coach Mike Karin recalled. She went on to score 13 goals throughout her four years at the prep school.

“It wasn’t just on the backline,” Karin said. “She (had) a license to go up and be a presence on free kicks or even just regular play.”

Under former Syracuse head coach Phil Wheddon, Tivnan played out of her normal position until Adams joined as head coach in 2019. She has since been a key part in Adams’ plan for set piece offense — as she was for both Burke and Karin. 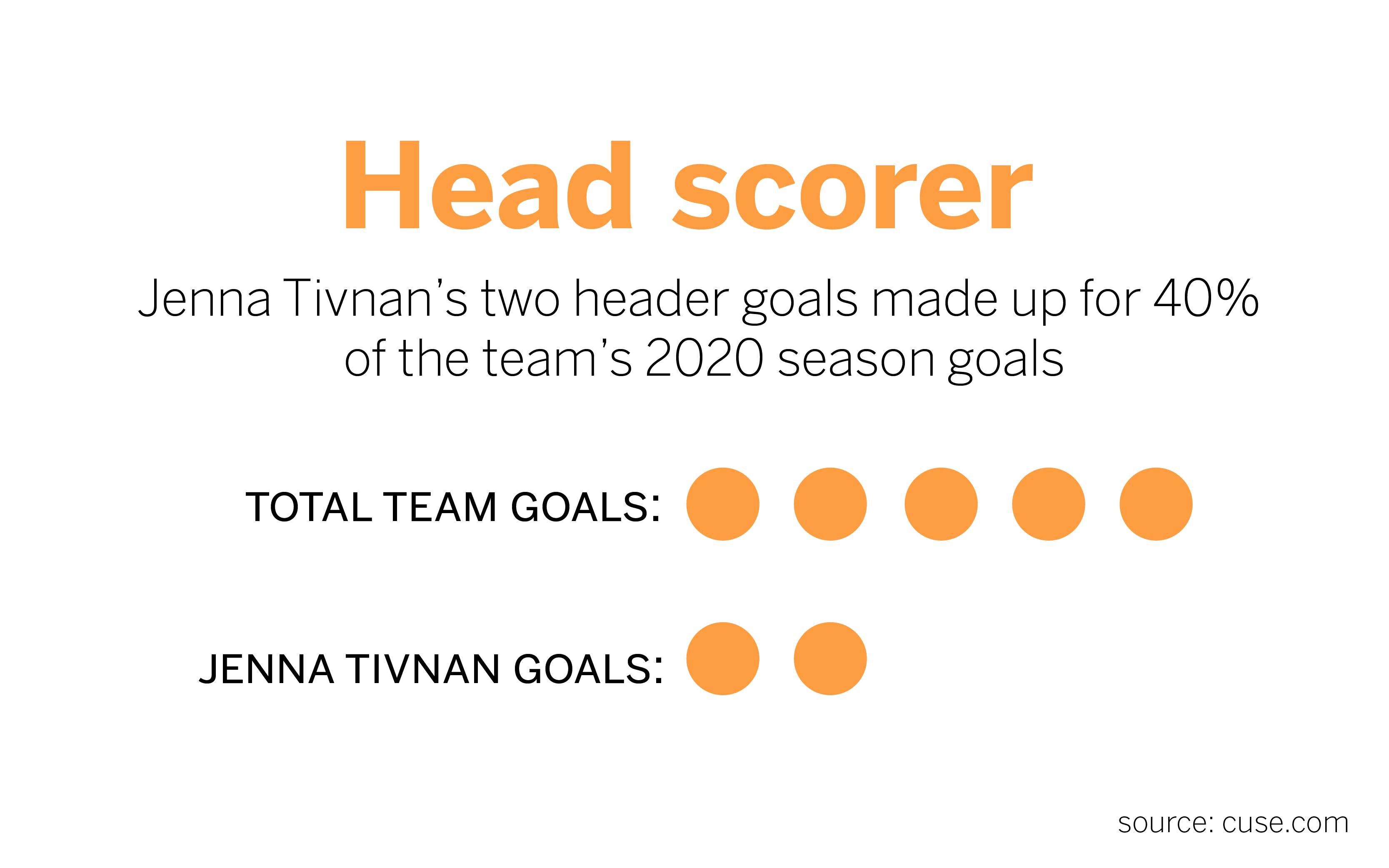 Last Wednesday, Teri texted Tivnan an iMovie-edited compilation of the center back completing headers with the hopes that the film would energize Tivnan before she played against Notre Dame, Teri said. The 5-minute reel starts with Tivnan lurking in Duke’s box multiple times, hopping through the air and planting her forehead onto the ball. Teri also mixed in headers from her youth and inspirational quotes.

Tivnan has already shown she’s capable of producing goals against ACC opponents, scoring her first collegiate goal off a corner kick from defender Lindsey Brick last season. Tivnan stationed herself in the penalty area and rose up against a University of Miami defender, knocking the ball into goal’s right side for Syracuse’s only win of the season.

During the summer and while at Syracuse, Tivnan has worked with Burke and coaches at Syracuse to continue sharpening her timing more. The center back hasn’t completed any highlight headers so far this season, but when Tivnan does, her mom will add it to the compilation.