Posted at 09:45h in Girls Soccer by PlayDifferentAurora

Two of England’s biggest national football tournaments for junior schoolchildren culminate in four Wembley finals, giving 22,000 boys and girls to take to the pitch to represent the 72 EFL clubs across England and Wales, helping to forge even stronger ties between clubs and their local communities.

Inspiring children to be active, healthy and develop a strong sense of teamwork, both the Utlita Kids Cup and Girls Cup are six-a-side competitions offering schools the chance to earn the right to represent their local EFL Club on a regional basis, before culminating in four national finals which will take place prior to the Papa John’s Trophy, Sky Bet Championship, League One and League Two Play-Off Finals on the hallowed turf of Wembley Stadium.

Ben Wright, Chief Commercial Officer of the EFL, said: “The positive impact of EFL Clubs in their communities goes far beyond 90 minutes on the pitch and the Utilita Kids and Girls Cup is testament to that.  EFL Clubs are in the heart of their communities and with 80% of people in England and Wales living within a 15 mile area of an EFL Club, they have the platform to inspire and make real positive and lasting change in society.  We are looking forward to seeing thousands of girls and boys engage with their local EFL Club, play football, build friendships and have fun, and see the finalists enjoy the once in a lifetime experience of playing at Wembley Stadium ahead of one of our prestigious finals.”

Jem Maidment, Chief Marketing Officer at Utilita Energy said: “The EFL Kids and Girls Cup tournaments are one of the many ways that Utilita Energy supports British Football. Our State of Play report revealed the impact the pandemic had on football families, with 70 percent of parents saying their child’s physical and mental health had been affected without access to the game.

These two all-important schools tournaments will also be supported by our latest ‘Football Rebooted’ campaign, our mission to get one million pairs of good quality football boots back onto the pitch, whilst improving access for one in five families who struggle to afford all the kit needed for their children to play.”

Jack Wilshere and Karen Carney ran a training session for a group of 25 children with an array of warmups, drills, and games at the EFL League One team’s ground. Helping coach the kids, the pair also got involved in the games, offering an unforgettable experience for the future stars of the game. 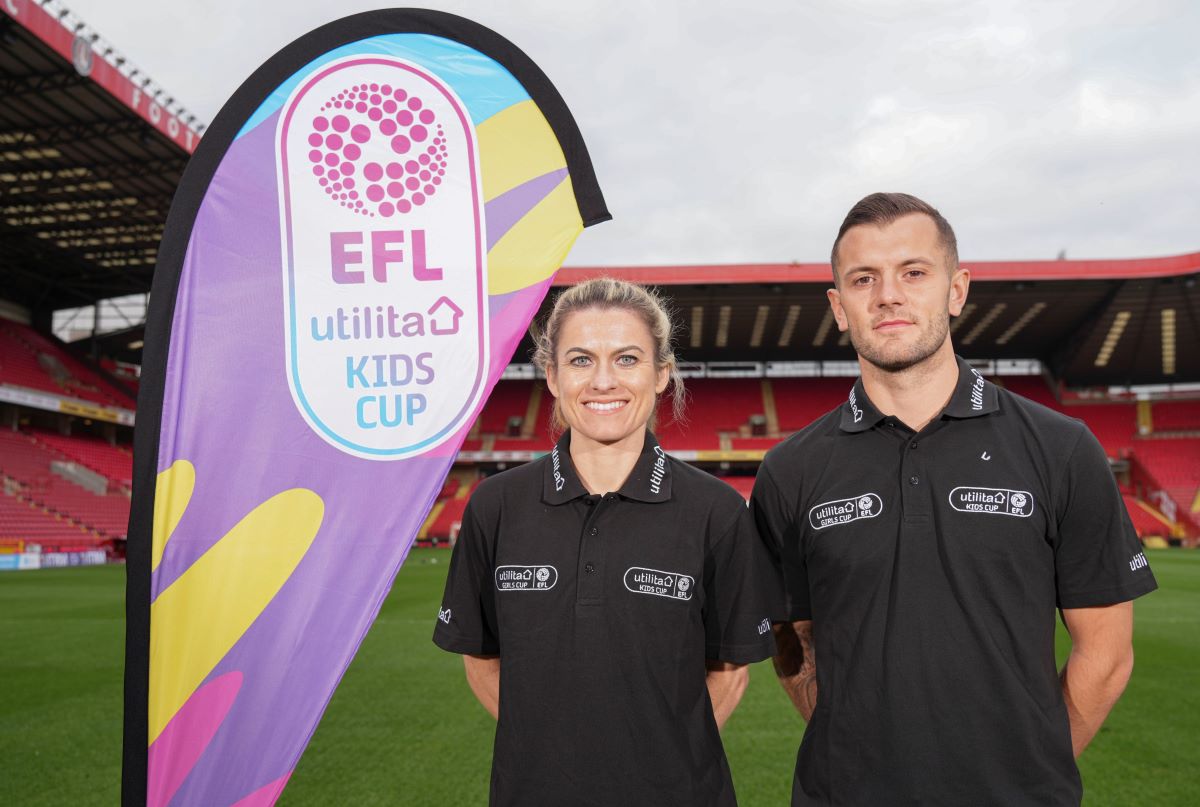 Wilshere commented: “It’s amazing to be a part of this launch, which I hope inspires young players all around the country to get out and play the beautiful game.  It’s important that football clubs give back to their local communities and it’s great to see EFL Clubs running these type of competitions for children of all abilities. It was a pleasure to help coach some of the players at The Valley and set them on their footballing paths.”

Carney added: “The talent on show yesterday was incredible to see and I was honoured to help take a training session with the kids and Jack. Projects like this from the EFL and Utilita are so important for inspiring the next generation of talent and engaging fans & families in the world of football.”

Utilita have partnered with the EFL to power one of Britain’s biggest junior football tournaments, The Utilita Kids and Girls Cup. As part of Utilita’s work to help kids keep active through playing football, over 22,000 schoolchildren will take part in the six-a-side tournament for the chance to represent their local EFL club and compete for a once in a lifetime appearance at Wembley. To find out more, visit www.efl.com