Posted at 15:00h in Training by PlayDifferentAurora

“We had worked so hard, we knew a win was coming,” said Evans, a forward for the Beavers. “There was a lot of screaming and celebrating. It was worth all the work.”

Evans scored three goals in the win over Dordt University, which earned him American Rivers Conference Offensive Player of the Week, a first for BVU since Kwame Antwi scored three goals in a BVU triumph eight seasons ago. Evans and the Beavers followed the victory with a win on the road (joining the BVU women’s soccer team, which also won that day) at Crown College.

“The bus ride home after a sweep was incredible,” Evans said. “We had a speaker on the bus and everyone was singing. That’s the best bus ride home we’ve had since I’ve been at BVU.”

Evans has been making great memories for himself and his teammates since stepping foot on BVU’s campus three years ago. The junior has been a steady presence on the field for the Beavers, leading the team in scoring in the spring 2021 season. He’s also been a stalwart on campus as president of BVU’s Criminal Justice Club. 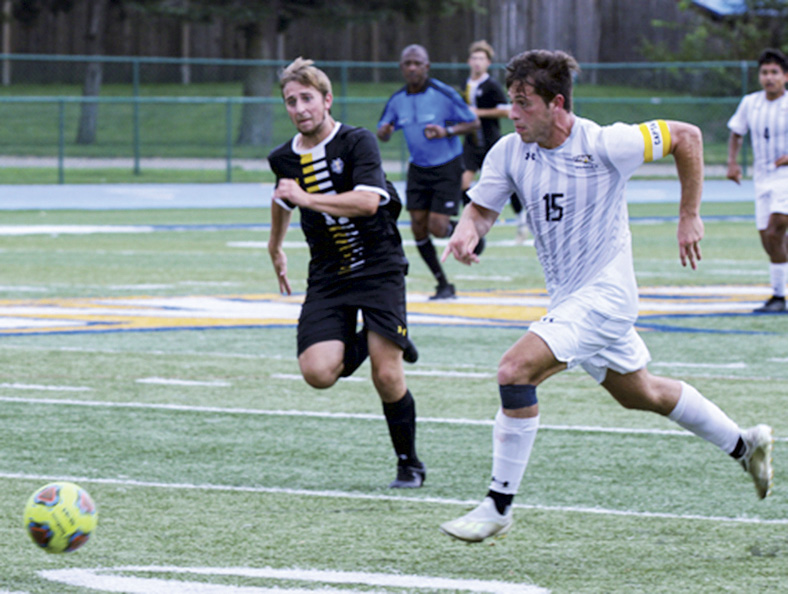 Buena Vista soccer player Braedan Evans vies for the ball during a match earlier this season against Dordt University.

“(BVU men’s soccer coach) Ross Minick recruited me out of high school,” said Evans, a graduate of Millard West High School in Omaha. “Ross was always very nice and showed a lot of interest in my teams. When I came to campus, I hit it off with Dr. Richard Riner (assistant professor of criminology and criminal justice) immediately. The combination of helping to build a soccer program while contributing to a growing criminology and criminal justice program with its new Center for Criminal Justice Studies were huge draws for me. Plus, the campus is beautiful.”

As a freshman, Evans took the rare step of taking a 400-level class. His work in criminology 477 demonstrated he had what it might take to major in the field. Evans, who has a grade-point average of 3.7, spent an interim period at BVU creating crime scenarios for the simulator used at the Center for Criminal Justice Studies, a site used by area law enforcement for training.

He’s adding a minor in Spanish to better serve the community in which he’ll reside.

“After college, I plan to enter the U.S. Army, serve on active duty for four years, and then become a police officer,” he said. “After working as an officer a few years, I’d like to become a detective.”

What has attracted him to law enforcement?

“I’ve had first-hand contact with our community,” said Evans, a guest of the Storm Lake Police Department’s “Food with Friends” efforts within various Storm Lake neighborhoods. He has also joined Storm Lake Chief of Police Chris Cole in delivering food to families in need. “I want to be able to protect my community, to model good behavior and make the area safer for my children one day.”

Until that day, there are goals to kick and those to chase as a student-athlete. Evans hopes there are more scenes like the celebration following the victory over Dordt.

“Getting a hat trick at BVU was the greatest soccer accomplishment I’ve had,” Evans said. “Before I knew it, we had the coaches and all our teammates out on the field doing a standing dog-pile celebration. I’ll never forget it.”

AS A WAY to thank the community for its support, Buena Vista University will host its soccer Community Game free of charge at Peterson Field this Saturday with the women’s game at noon and the men’s game at 2 p.m.

The public is invited to watch the Beavers take on Finlandia University. In addition to free game admission, BVU will provide free popcorn, photo opportunities with Buford T. Beaver and giveaways for the whole family.