Posted at 17:03h in Training by PlayDifferentAurora

Sarah Fuller has walked the red carpet at the ESPY Awards, she has met NFL stars Rob Gronkowski and Derrick Henry, she has mingled with Olympic snowboarding gold medalist Chloe Kim, and she has become social media friends with Billie Jean King, one of the greatest tennis players of all-time.

But scroll through Fuller’s Twitter timeline and you will find her often retweeting items about obscure high school and middle school athletes across the country. That’s because the former Vanderbilt kicker, who has more than 71,000 Twitter followers, wants as many people as possible to learn about the girls who are following in her footsteps and playing football.

“There needs to be more exposure [for girls]. That’s why I repost anything I see,” said Fuller, who gave up football so she could focus on being a soccer goalkeeper after transferring to North Texas this year. “I reach out on social media, I’ll make sure to send them a message, just to let them know that I’m always available to talk.

“It’s not easy. There are people who are opposed to that. But the more that gets out there that girls are capable and willing to do things, and they want to do these things, the more these opportunities are going to become available.”

It has been labeled the Sarah Fuller effect on social media. Fuller has tried to empower females of all ages after she made college football history last year by becoming the first female to play in and to score in a Power 5 game, and girls now go out of their way to let her know that she was a trailblazer who led them to football.

“It’s been really cool how many girls have reached out,” Fuller said. “If they were inspired by me, then that’s really cool.”

There have been others in recent years, such as Brooke Cohen of Frisco Independence, Tori Soland at Arlington Pantego Christian and Madison Martin at Southlake Carroll. Those three were all kickers.

“[Fuller] definitely put it more on the map,” Oberkrom said. “It was coming even before that, but I think it made girls more comfortable for sure.”

There are still fights for gender equality in sports, most notably the long legal battle being waged for equal pay by the U.S. women’s national soccer team. There was an uproar about the wide disparities between the training facilities at the men’s and women’s NCAA basketball tournaments in March, coaches criticized the setup for the NCAA women’s volleyball tournament in April, and Oklahoma softball coach Patty Gasso called the facilities and schedule shameful at this year’s Women’s College World Series — after winning the title.

But in June, the country will celebrate the 50th anniversary of Title IX, which was enacted in 1972 to prohibit sex discrimination in any educational program or activity, including sports, that receive federal financial aid. Girls are no longer being told that they can’t play football, and the number of girls playing a male-dominated sport is rising nationwide and in Texas.

In the most recent statistics available from the National Federation of State High School Associations, there were 210 girls playing 11-man high school football in Texas in 2018 (up from 169 in 2014) and there were 2,364 girls playing nationwide (up from 1,565 in 2014). Some football coaches, like Ranchview’s Terry Smith, are even recruiting girls.

Smith had seen Mosley play in soccer games and approached her several times about kicking for the football team. Mosley, who learned about Fuller through social media, finally said yes this summer as she prepared for her junior year. Mosley has kicked field goals of 33 and 24 yards, has made four extra points and also handles kickoffs for Ranchview.

“He has been asking me since about my freshman year. I usually just give him the straight answer of, ‘No, you’re crazy, I’m a girl.’ But this year I look at things from a different perspective,” Mosley said. “I decided I’m going to give it a shot. It has been really fun. I’ve enjoyed my surroundings and the support I get from the coaches and the boys.”

“I definitely think it would be smart to start looking into that,” Fuller said. “There is a lot of untapped potential out there. It’s a whole market where you could have incredible kickers.”

Kolba, a longtime soccer player like Mosley, had the courage to ask Denton Ryan coach Dave Henigan if she could kick for one of the premier teams in the state — a team coming off a 15-0 season and Class 5A Division I state title. While Fuller said she received some backlash from strangers for being a girl who played football, Henigan welcomed Kolba with open arms at the beginning of fall practice.

“I think it takes a lot of guts to do what she’s doing,” Henigan said. “A female coming out and playing football No. 1, and we have a pretty good program, so having the courage and the guts to do it. More importantly, what has impressed me about Ally is the work she has put in. She has worked really hard to improve at it.”

Kolba has served as Ryan’s backup kicker, and she got into a game against Denton High on Sept. 16 and made all three of her extra-point attempts. Oberkrom said she has made a 45-yard field goal in workouts and puts pressure on the boys that she’s training with to try to beat her.

“Last year I was watching Ryan’s first game, and I was like, ‘That would be so cool if I played.’ All last year I started practicing to get ready for this year,” Kolba said. “They treat me like a sister. They treat me so good. It feels like a family.”

Fuller’s goal is to play in the National Women’s Soccer League, but if that doesn’t happen, she wants to use the master’s degree she is working on — sports entertainment management — to help promote women’s sports. One idea she has is to try to bring an NWSL team to Dallas or Nashville, Tenn.

Fuller didn’t play football in high school at Wylie, saying, “It never crossed my mind to go out and try out for the football team.” She only joined the Vanderbilt team after being asked to try out when all of the team’s kickers were sidelined by COVID-19 issues.

But once she did, she quickly realized that she was going to be thrust into the national limelight and could make a difference. That’s why she wore the phrase “Play Like A Girl” on the back of her helmet to promote a nonprofit organization by the same name that encourages girls to play sports and get exposure to STEM opportunities.

“It’s cool to see that I’ve changed the narrative for so many girls and women out there who have said, ‘I’ve always wanted to play football, and maybe I can’t, but my daughter can,’ ” Fuller said. “I was the first in a Power 5 football game, but I don’t want to be the last.” 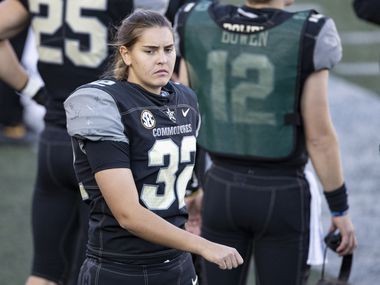